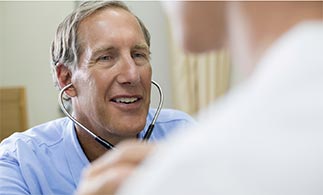 James A. Thompson, DO

Since the age of ten, Dr. Thompson has been fascinated by the human body. His combined interests in anatomy and health restoration are what led him to study and practice medicine. Part of what he finds most rewarding about his job is being able to help solve his patients’ medical problems and alleviate their pain and disease. Dr. Thompson strives to provide patients with all the necessary medical information they need so that they can contribute to the development of their plan of care.

Dr. Thompson diagnoses and treats dysfunctions in muscles, tissue, fascia, and the skeletal system through osteopathic manipulative therapy (OMT). As an osteopath, Dr. Thompson is trained to provide chiropractic adjustments and develop exercises and stretches similar to physical therapy. OMT helps eliminate pain and improve overall health by restoring normal function to the body. Recognizing and treating internal and external dysfunctions is the primary goal of an osteopath.

Dr. Thompson served in the United States Air Force for eleven years. During that time, he was a practicing physician and the Director of Internal Medicine at Langley Air Force Base. He joined the TPMG Hospitalist Division at DePaul Medical Center in 2016, and transferred to the TPMG Hospitalist Division at Mary Immaculate Hospital in 2017. Dr. Thompson joined Newport News Internal Medicine later that same year, and is currently accepting new patients.