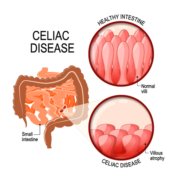 Only a few years ago, if you requested “gluten-free” at a restaurant you received a blank stare. Today, one in five Americans choose a gluten-free lifestyle. Now you may ask yourself why eliminate foods like pastries, pasta, and bread out of your diet? Well, for some people this lifestyle is a choice, for those with celiac disease (CD), it is a necessity. Nearly one percent of the U.S. population is affected by CD, a severe condition that can lead to digestive problems and nutritional deficiencies.

What is Celiac Disease? 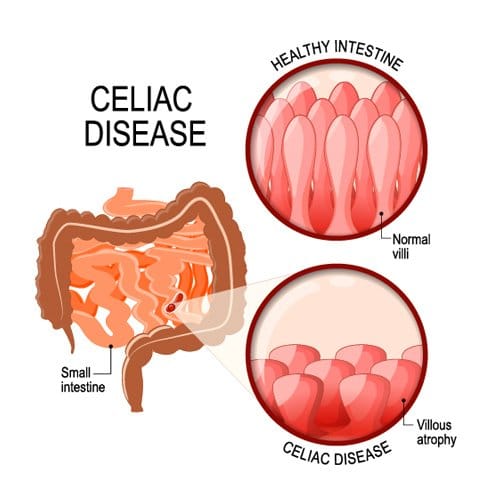 For someone with Celiac Disease, eating foods containing gluten produces an immune response that attacks the villi in the small intestine, which are used for the absorption of nutrients into the body.

“Like any organ, if the intestine is ‘sick,’ it cannot perform its job optimally, and many nutrients are not properly absorbed. The dysfunction is not a permanent issue; with a strict gluten-free diet the bowel will return to normal function,” said Jonathan D. Eisner, MD, FACG of TPMG Gastroenterology in Newport News.

Celiac disease has a broad clinical spectrum from asymptomatic to atypical patients where non-gastrointestinal (GI) signs and symptoms are present to classic GI disease. Today, it appears the majority of celiac patients are found with latent disease, meaning you have inherited the genes for celiac but have not yet experienced symptoms. Typically for these patients, the disease lies dormant until it is triggered later in life. The average age of diagnosis is around 45 years of age, and approximately 25% of patients are diagnosed after 60 years of age.

Classic GI indicators of CD include diarrhea, bloating, and gas. Since these symptoms also correspond closely with Irritable Bowel Syndrome (IBS), often times the diagnosis is delayed. One distinguishing difference in symptoms between IBS and an individual with celiac can be a drop in weight because of the body’s inability to absorb nutrients properly. Aytpical non-GI manifestations of celiac include anemia, caused by poor absorption of iron and folic acid and osteopenia and osteoporosis due to poor absorption of calcium and Vitamin D. In some cases a patient may have gynecologic and fertility issues or skin lesions, and present no underlying GI symptoms delaying the diagnosis.

Once these individuals follow a gluten-free diet they notice a substantial change in energy, weight, and reduced digestive issues.

Celiac disease is hereditary, with a link between intra-familial occurrence. If a first-degree relative (mother, father, or sibling) has celiac, the patient has a one in ten risk of developing the disease. One does not manifest into celiac without two genetic markers, HLA DQ2 and HLA DQ8. Inflammation of the small intestine and poor nutrient absorption may lead to problems affecting other organs and systems, including iron deficiency, low bone mineral density, skin rashes, and chronic fatigue.

Diagnosis and Treatment of Celiac Disease

Typically, the first step when confirming if a patient has CD is performing a series of blood tests looking for antibodies to the autoimmune disease that is disrupted. However, this is not considered to be a definitive diagnosis. The standard procedure for diagnosis is obtaining biopsies from the small intestine that proves the tissue is undergoing damage.

“Blood/serum antibodies can be used for diagnosis, but don’t always reflect the full extent of diagnosis and 10% of the population cannot make the specific antibodies, so they would falsely test negative,” said Dr. Eisner.

“The gold standard for diagnosis is a duodenal biopsy, which involves removing a piece of tissue from the small intestine. In my practice, I take at least six biopsies for the most accurate diagnosis,” said Dr. Eisner.

The treatment for celiac is fairly cut and dry — eliminate all gluten from the diet, including wheat, rye, and barley. Once diagnosed, patients must adhere to a lifelong commitment of a gluten-free lifestyle and be counseled by a registered dietitian. With a higher prevalence of testing, scopes, and recognition, we are seeing a greater availability of gluten-free products on the market. In addition to eliminating gluten, dietary education is vital for a lifetime of good health. Patients will also need to take supplements for the deficiencies caused by the malabsorption of nutrients in the small intestine.

In rare cases, a patient is considered Nonresponsive Celiac Disease (NRCD), which is a lack of response to six months on a gluten-free diet or recurrence of Celiac-related symptoms despite adherence to strict elimination of gluten. Often this is from unrelated conditions including bacterial overgrowth and lactose intolerance. In this instance, a gastroenterologist would work with the patient to develop an appropriate treatment plan.

The precise cause of celiac remains unknown, but research suggests there is an underlying genetic predisposition to CD. Currently, there is no cure for the disease and the highest priority for those affected by this lifelong condition is the adherence to a strict gluten-free diet.

Jonathan D. Eisner, MD, FACG, is a fellowship trained, board certified gastroenterologist specializing in the treatment and management of gastrointestinal diseases. Dr. Eisner has over 25 years of experience in the treatment and care of gastrointestinal conditions including colorectal polyps, cancer prevention, Crohn’s Disease, Ulcerative Colitis, and Gastroesophageal Reflux Disease (GERD).

TPMG Gastroenterology offices are conveniently located in Newport News and Williamsburg. Our gastroenterology specialist physicians have extensive experience in the treatment and care of gastrointestinal conditions including Crohn’s disease, ulcerative colitis, Inflammatory Bowel Syndrome (IBS), and acid reflux, as well as cancer screening and prevention.